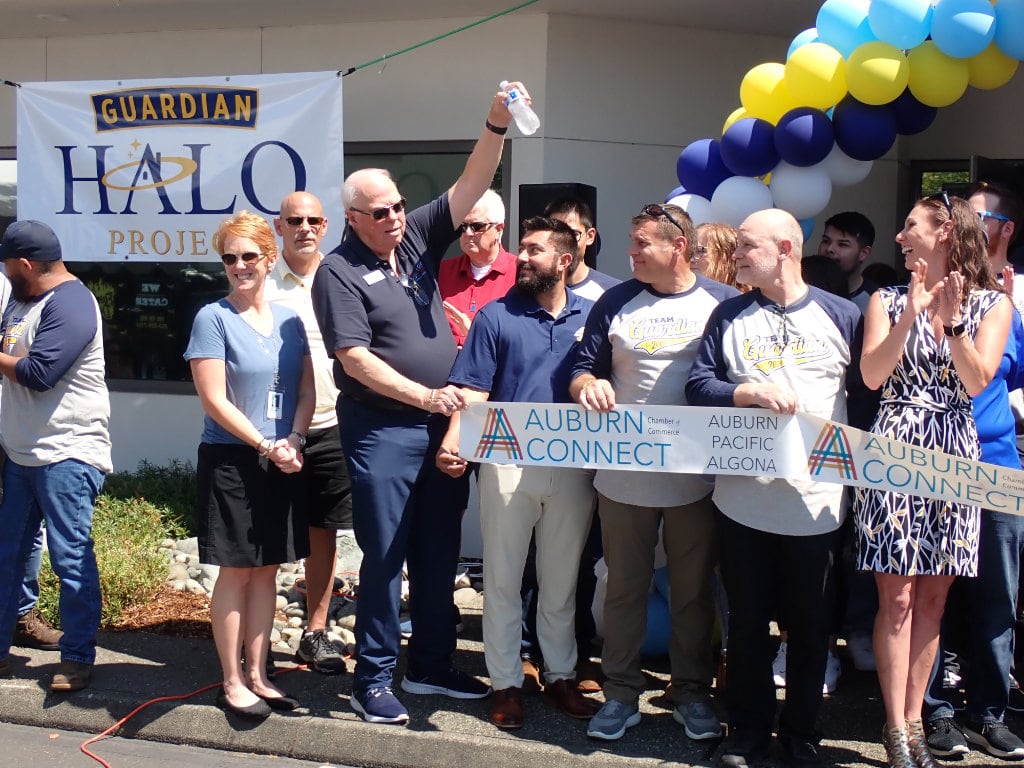 On Friday, July 29, Guardian Roofing Owners, Lori and Matt Swanson, celebrated the official opening of their new, larger location at 4020 Auburn Way in North Auburn. Helping them “raise the roof” during their ribbon cutting ceremony was Mayor Backus, members of City Council, and, of course, the 125 employees who make up the Guardian Roofing & Gutters team and their families. The ceremony not only served as a celebration, but as another milestone for the Swanson’s who have been a power- house husband and wife duo as leaders of the Puget Sound Roofing industry for decades.

Guardian Roofing & Gutters’ new location is triple the size of their previous office which was located at 1400 West Main St. The expansion has allowed Guardian to provide even better care for its clients through organization and efficiencies. The new facility offers Guardian the opportunity (and room) to house an in-house technician training center as they continue to emphasize the importance of advancing their team’s education and knowledge of the services they offer. In addition, the expansion has also allowed Guardian to expand its team and service offerings, hiring dozens of skilled technicians since officially moving towards the end of 2021

Although there have been lots of new features to Guardian’s business, Matt and Lori Swanson are anything but new to the industry.

“I never thought I’d say this but I’ve been in the roofing industry my entire career,” says Owner Lori Swanson. Known as a heavily male-dominated industry, Lori has been a part of the roofing industry beyond her professional experience, but since birth! When she was born, her father was a Journeyman Roofer, traveling out of state often. Later on, in 1975, Lori’s father started his own company. During the summers when Lori was in grade school, she would ride around in the truck with her dad while he was doing project estimates – that is, until she was old enough to work at his shop. Beginning in Jr. High, Lori spent summers on the roof. She admits that it was really hard work, but was incredibly thankful to have had the experience early on and to understand that if you own a business, you have to be tough.

After earning her Bachelors Degree in Business from Saint Martins University in 1996, Lori’s father recruited her to stay on with the company, leading to her nearly 10-year role with the company. At that time, Lori and her husband, Matt, decided to start their own residential roofing company. Beginning as a team of just five, Guardian Roofing’s humble beginnings evolved and Lori began to wear many hats, beyond just hard hats, leading to her taking on the position as President in 2019.

Since opening, Guardian has earned and maintained several regional and national industry awards including the 2022 Excellence Award and the 2022 Regional MVP. This month, Guardian maintained its coveted place on Roofing Contractors in America’s Top 100 list, ranked 86th in the nation for Annual Revenue. In alignment with its mission to support the community, Guardian Roofing started the Guardian Halo Project in 2018, a philanthropic project that gives a major roof repair or total replacement to one homeowner in desperate need. Together with local vendors like GAF, Owens Corning, DTG, and Beacon Roofing Supply, the Guardian Team has helped four different families in need of major roof repair. Guardian’s 2022 Halo Project family will receive a new roof this September.

On the topic of Guardian’s Halo Project, Mayor Backus had this to say at the Ribbon Cutting Ceremony, “That’s what businesses do here in Auburn, we take care of one another, and that’s why I’m so proud of Guardian’s role in our community.”

Looking ahead, Lori and Matt Swanson are excited at the opportunity to further serve the Auburn community and to continue to grow within an industry they love.

View a Gallery of the Celebration